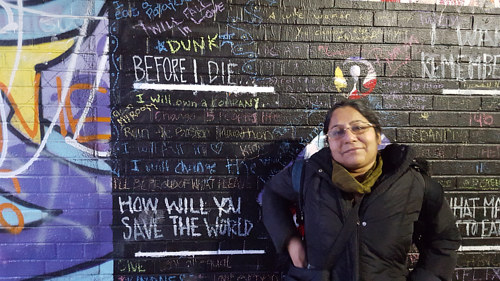 Mandira Bhaduri was born in Kolkata, India in 1966. She works in mixed media on paper and board. Her interest lies in recycling of all kinds of paper and use them in a different context as an art form. She mainly works with acrylic medium. Block printing and stamping capture her interest deeply.

She likes the complex process of weaving conscious and subconscious levels together in producing an artwork and wants to reach the world using the visual tapestry of non-verbal language.

Mandira is a self taught artist and lived in USA since 2004. Her solo exhibitons were held in Silpangan Art gallery in Dhaka, Bangladesh in 2011 and in the University of Chicago sponsored by Committee of Southern Asia in 2013. She moved to Kolkata in June,2016.

By profession, Mandira Bhaduri is a Bangla language teacher in all of her life. She taught Bangla in the University of Michigan from 2004-2007 and she worked as a Bangla language lecturer in the Department of South Asian Languages and Cultures in University of Chicago from 2007-2016. Teaching Bangla and making art are two inseparable parts in her life which complement each other.